You are here: Home / Competitions / Blood and Victory on the Reef 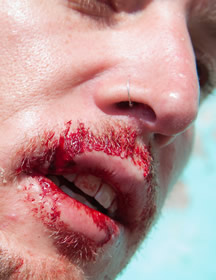 Blood was spilled and triumph had during the final Sandshoes Boardriders pointscore of the season – the event that decided the Open Championship for 2010.

In a scenario of high drama, title contender Matt Mulder was momentarily knocked out when a radical rebound manoeuvre off the whitewash went horribly wrong.

Mulder, in a two-way finish for the crown with Jarrod Horner, was pulling all the stops when the accident happened in the final seconds of his heat. He was dragged from the water semi-concussed and later treated by a very helpful paramedic.

Happily the damage was contained to cuts on his mouth and jaw that later required eight stitches at Sutherland Hospital.

With Mulder out of action, Horner went into overdrive to win his heat, semi-final and the final to clinch the championship of the world! It was a consummate performance!

It represents a magical year on The Reef for the Horner family – two weeks ago Jesse Horrner nailed the Junior championship.

The other placings in the final on Saturday were Peter Greig, Steve Cryer and Greg Ferrow.

While he was too groggy to continue, Mulder still finished runner-up for the crown after a series of barnstorming performances during the season.

Saturday’s event gave the Club its first perfect score – 10 contests out of 10 for the year.

As per usual, Leah Maclean and Paul Byers were there to grab all the big scores, big manoeuvres and big wipeouts for the Gallery.

All members and their families are invited to join the Club for the Presentation Night at South Cronulla Bowling Club on Saturday night (27 Nov) at 6pm-10pm.

And keep 4-5 December open for the annual Ron Inman Memorial Teams Showdown. All proceeds to the NSW Cancer Council.