You are here: Home / Competitions / Dion Stretches His Title Lead

The Earl of Twirl – otherwise known as Dion Earle – has made a bold statement. And that is, I want to be SuperGroms Champion in 2011!

The nippy goofyfooter stamped his authority on the race for the title trophy with a boom set of performances in the October pointscore to give him the edge on main challenger Eathan Jackson. 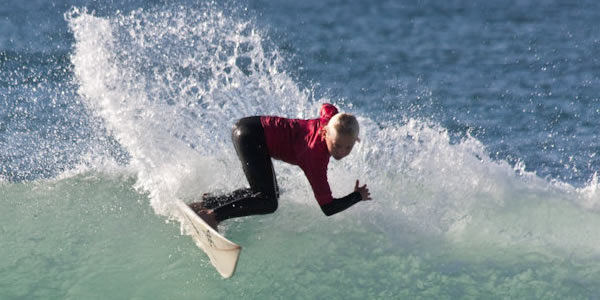 Eathan took the honours in the September event that saw Dion knocked out of the final. But October saw him get his revenge with a massive backside attack that made a mockery of the slow half metre waves.

The other main contender Travis Heaps earned solid points in the September contest but was a no-show for October and now has only the November showdown to make up the points difference.

All the SuperGroms cut loose on a warm sunny day on the reef, with big moves coming thick and fast.

While Earle edged Eathan in the final, Shannon Hatheier was dynamic in coming home in third place, followed by Henry Fuller and Lachlan Hickey.

Lachlan deserves special mention, competing – unbeknowns to him at the time – with a fracture in his upper arm. He knocked-up three very solid rides and but for the mistake of not signalling a double whammy would have finished higher up the placings.

Fingers are now crossed that the waves behave for the Junior and Open pointscores on 15-16 October.

Jarrod Horner is currently steaming away in the Open, while Reece Moffat and Jacob Boylan are locked in a tight struggle for Junior supremacy.