You are here: Home / Competitions / JT Turns On The Fireworks 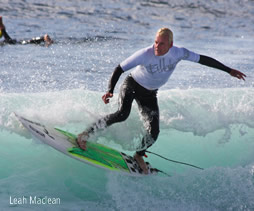 Evergreen John Tucker was at his barnstorming best in the September pointscore, drilling the lip relentlessly to take out the Open final from a hungry Drew Kelly and ever constant Jack Irvin.

JT’s victory, in strong, challenging one metre waves, has moved him to No 5 on the championship leaderboard, behind Jarrod Horner, Matt Cook, Matt Holman and current No 1 Mr Irvin.

There were titanic performances throughout the event, with plenty of massive reos, slashing cutbacks and the occasional head dip.

With two contests left, Irvin has a 13 point lead on Matty Holman with Cookie a further 13 points behind – so the 2009 title is very much still an open affair (Jarrod is on 61, JT and Drew on 60).

In the Juniors, the race for No 1 has turned into a four way tussle.

The win has shot him to 54 points – just three adrift of Jacob Boylan and Reece.

Harrison is only six points off the lead.

The surfing in the Juniors was again hot, hot, hot!

Thanks to Leah and Paul, the Photo Gallery and Video page have all the action.

NEXT EVENT IS OCTOBER 3-4; OR 17-18
SUPER GROMS STAY ON STANDBY FOR SEPTEMBER

The surf was a bit too hefty for the Super Groms on the weekend, but not to worry.