You are here: Home / Competitions / Lachlan Locks Up last Event

The surf gods haven’t been kind in recent months, but that’s not a problem for Supergrom contestants with small statures but whopper hearts.

Whereas the Open and Junior divisions have been cooling their competitive urges since August– when the Reef last unloaded – the groms have been wracking up the points to make for an exciting finish to the 2011 title race.

Frontrunners Dion Earle and Eathan Jackson have been the top performers for most of the season, and have finished in that order for the championship – despite Dion missing the last event of the year.

Eathan, with plenty of big turns and off the tops, came home runner-up for the November showdown to enhance his tally for the year, but finished just shy of his goofyfooter rival.

November belonged to 11-year-old Lachlan Hickey, with a backside attack that defied his height and weight. He was literally all over the small waves, bouncing off the lip and drilling his turns with thrust and precision. 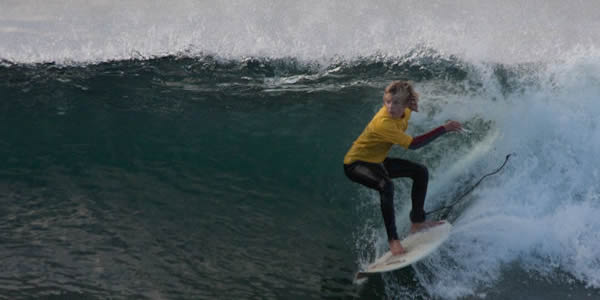 Shannon Hatheier, one of two female groms (the other is Jae Withers), showed she refuses to be awed by male competitors and finished in third place to inch ever so close to the final Top Six on the championship leaderboard.

Spencer Tyler, riding a longboard, placed fourth with some fancy footwork and trims through the tricky sections.

They and all the other grom contestants will be hailed at the Shoes Presentation Night at South Cronulla Bowling Club on Saturday 3 December.
The big night is open to all members, families and friends, kicking off at 6pm.

The function will also be a chance to honour our wonderful sponsors: