You are here: Home / Competitions / Mulder “The Man” in July

The thrilling backside attack of Tom Mulder held sway during the Sandshoes Boardriders July pointscore, but reigning Open champ Jarrod Horner still holds the ascendancy in the run home for the 2011 title.

Mulder unleashed a full complement of blockbuster manouevres to easily take out the final, ahead of Horner, Dave Moffat, Sid Cassidy, Mark Campbell and Kim Anderson.

The clean one metre swells were picture perfect for another day in the office for the cheeky goofyfooter, with one roundhouse cutback-360 combo earning him raucous applause from onlookers.

In a major upset in the junior showdown, Andrew Petoumenos got the better of runaway championship leader Reece Moffat, followed by Logan Wier. 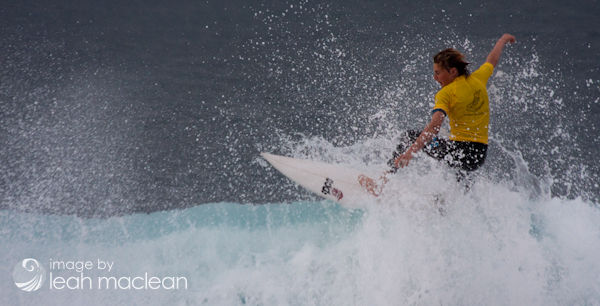 Dion Earle has cemented his place at the top of the 2011 SuperGroms championship ladder with a definitive display in the July pointscore. Earle has now racked up 45 points, to lead the title race. Pintsized Lachlan Hickey claimed second place in the pointscore final, with Travis Heaps third and Eathan Jackson fourth.