You are here: Home / Results / Of Brothers and Dads

Brotherly love was everywhere – until the chips were down – during a dazzling May Shoes pointscore held in solid, windswept waves.

Jesse Horner zoomed to a third straight Open victory to consolidate his 2012 leadership credentials at the expense of older brother Jarrod, the defending champion.

As fate would have it, Jarrod failed to make the final after finishing fourth in his semi behind – wait for it – Jesse and father Jack! 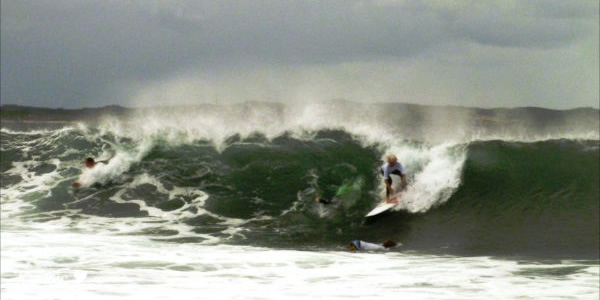 In the Junior final, it was a battle of the brotherhood as Harrison Martin and his younger brother Nathan traded booming backside manouevres to give the judges a real test of their abilities.

The SuperGroms event was a titanic struggle with Xavier Izzard taking the honours from Dion Earle, Travis Heaps, Lucas McGree and Lachlan Hickey.

Lucas MaGree’s dad Brad was the hardest working member of the tournament – pushing his nine-year-old son on to every wave during the heats, semis and final!

The dynamic duo was in such synch that elder son James – fending for himself – finished short of making the final.

And so it’s now on to June 2-3 to witness yet another barnstorming display of surfing greatness that not even the ASP World Tour can come close to.

Meanwhile, our sponsorship family has received a major boost with the coming on board of Only Organic and Belle Property. More on this development in the near future.