You are here: Home / Social / Shoes On The Big Screen

Way back in time, the Sandshoes reef was a prime location for surf movie makers.

Those luscious short tubes and long walls allowing for toes on the nose all the way through to the Ally made for wicked film action…and one of the best photographers going round was Steve Core, a home grown Cronulla wiz with the lens.

Apart from getting plenty of ace shots over the years, Steve also put together two highly acclaimed movies – In Natural Flow and Ocean Rhythms. 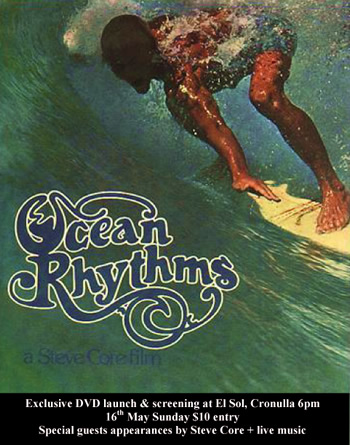 Ocean Rhythms was a big hit at the time – and is now BACK as a top gun DVD.

Top gun because it features plenty of footage at Shoes!

Peter Townend, the former ASP World Champion who was our guest a few weeks back, is one of the major stars of the movie, and finds plenty of tubes and head dips.

The launch of the DVD is being held at El Sol at 6pm on 16 May. The DVD will be screened, there will be live music, and “Apple Core” will be there to talk the talk on Shoes and other locations.