The club that calls the Reef and Oak Park Pavilion home

The Club was forged in the late 60s when surfboard riding was in the midst of its first revolutionary charge in Australia as a sport and lifestyle; when long boards ruled; lifesavers took pleasure in locking up boards in Surf Clubs; when wetsuits were barely available; when surf music filled the radio airways.

It wasn’t until the early 70s that surfing was fully recognised as a sport and healthy pastime, paving the way for Shoes to become a formal entity in the Shire…its own wave playground conveniently removed from the bluster, crowds and formalities of the Cronulla Beaches.

A club, by turns, strong and robust, other times a mere shadow of itself, as membership waxed and waned during any numbers of eras spanning five decades-plus.

Shoes partly by design and partly because of its location at the southern tip of the Cronulla peninsula – has been something of an eternal “country cousin” to the area’s string of large and strong clubs reaching back to the dawn of the surfing craze.

Its profile during the various eras was always at the bottom of the totem pole when compared with the likes of Cronulla, Green Hill, Eloura and The Point.

Membership waxed and waned, despite the Reef being a regular stop-off for some of the biggest and legendary names in the sport…Bobby Brown, Frank Latta, Peter Townend, Rob Conneeley, Brian Jackson, Mark Occhilupo, Ross Longbottom, John Rhodes, Jim Banks, Garry Birdsall, to name just a few.

Until Shoes defeated The Point in the inaugural Battle of the Reefs in 2016 (and subsequently a winner in again in 2018), the Club had no big event trophies in the cabinet. It hadn’t produced a world champion.

But that is part of the appeal of the break… Shoes Boardriders, in true humanitarian spirit, accepts anyone who wants to join, but there is definitely no shingle out there inviting participation.

It is not so much a case of rabid localism as an appreciation that Shoes can only handle so many in the line-up; so it follows that membership of Shoes Boardriders is very much an in-house arrangement.

And so it is today, a rough diamond of a club boasting in the order of 60-plus members – some golden oldies, some young family types, some testosterone-laden bucks; some raging older teenage dudes and a growing smattering of pint-sized grommets, plus a smattering of females.

A small, tight community that is full of enthusiasm and aware of the rich heritage it has duty of care over…boasting an array of mums and dads, uncles and aunties and grandmothers and grandfathers who support competing members.

Heritage that is not so much bound up with daring feats in the short, sharp walls and barrels provided by the Shoes’ reef (though there are plenty of examples of surfing heroics in the annals), more so instilled by the cavalcade of riders to pass through the Club’s ranks on their way to elsewhere.

The Shoes Boardriders’ dynasty straddles the spectrum of modern surfboard design…from heavy longboards to tiny fishes to light-weight longboards to twin-fin and three fin double enders and beyond.

A hallmark of its enduring existence is Shoes’ competing in every National Surf League knock-out series in the 10-year history of that unique club series during the late 80s-early 90s.

It was always a minnow in the championship, but veteran and club life member Reno Gillespie is recognised for completing one of the longest stretch-five manoeuvres ever… 21 seconds on the nose during a heat against the powerful Bondi In the Nude squad.
That ride has passed into folklore, not just because of its longevity but because it scored enough points to tie the total points tally for the Surf League match-up. Bondi were stunned that they scraped through on a tie-breaker. It was one of the club’s finest moments.

Not many of today’s younger members know that Sandshoes got its name from the days when riders ventured out literally wearing sandshoes to help ward-off the perils of sea urchins lurking on the reef…but they are aware of THAT blockbusting nose ride, courtesy of the story being passed down year after year.

Even more enduring is the amenities pavilion built on the hill in front of the reef prior to the Second World War. The showers and toilets service bathers and surfers alike, but the block-like pavilion’s real claim to fame is as the event headquarters of the Club.
Like a sentinel it has silently observed the ever-changing faces – as well as the same old faces – that have called Shoes Boardriders home away from home through the decades.

Like most board clubs, Shoes has a strong tradition of family ties…fathers and sons; fathers and mothers and daughters; sets of brothers, mothers and grandkids, uncles and aunties moving through the ranks over long periods.

It remains a tribute to the passion of local surfers that the Club has refused to die, that indeed in the 21st century it is more hearty and resilient than ever. 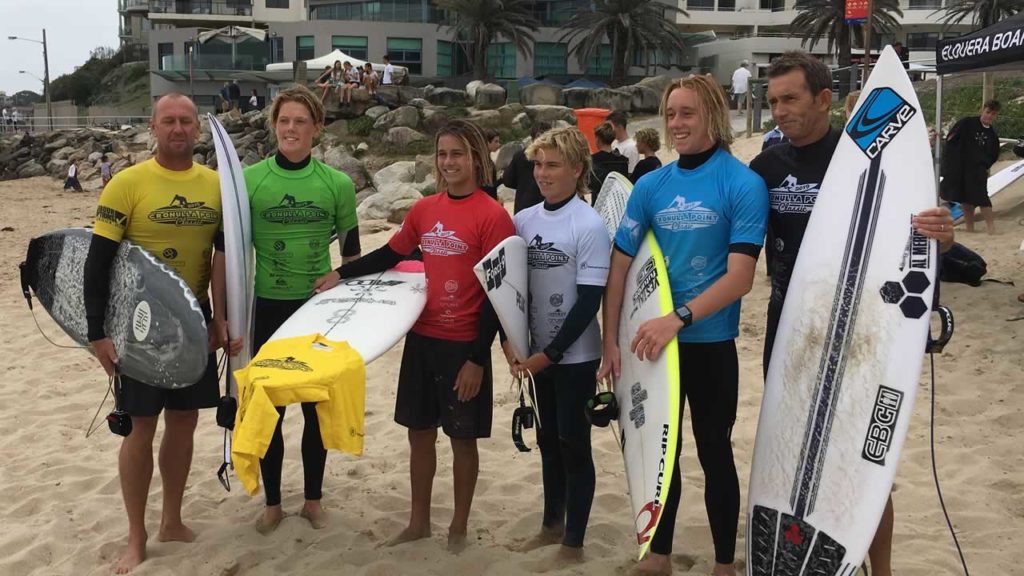 Today, the contests cover Open, Over 40s and Grommets, and hopefully, in the near future a separate Females category– reflecting the growing “family” components.

Our Patron for Life, the one and only and much loved Dr John Murray, continues to watch over us and the Reef…the second home of every member!

Like wise, the love and thanks of families and friends, and long-time supporters such as Leo Payne, the Sausage King of Cronulla, super dad Phil Mulder, Photographer and video extraordinaire Ian Macca McDonald, Treasurer/Manager Carol Gillespie.