Wow, what a brilliant start to a new season – top waves all day; a surge of new members; action a plenty and strong signs that the race for the 2012 championships is going to be electric!

Not since last August has the swell cooperated so splendidly for competitors, and combined with sunny weather, the scene was set for a classic set of showdowns.

Matt Bradley has been a Shoes devotee for decades, but being a shift worker has not played a big role on the comp front for a long time. But, watch-out, the dude is back in the hunt. 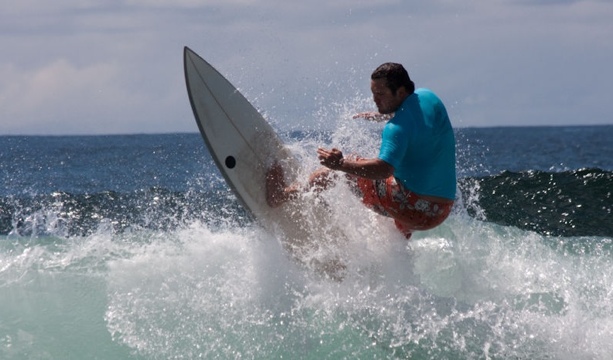 The scenario was like a blockbuster movie, with all manner of styles, manouevres, changing fortunes, dramas and a finish that left the judges guessing.

Bradley got the nod by a half nose on the strength of pure force across a number of threatening walls of water; using big carves, warp speed and an uncanny ability to finish each ride with finesse.

Horner, this year aiming for three titles in a row, was only centimetres back in second spot, followed by a gung ho Kelly.

The Junior final was no less entertaining, with Nathan Hatheier pushing the limits on his backhand to take first place from Jed Felice, Roan O’Sullivan and Andrew Petoumenos.

The surprise packets were to be found in the rampaging performances of the SuperGroms, with a range of new sign-ons giving this division a dose of propulsion that had onlookers hooting.

Travis Heaps was bold as brass to win the final from fellow Muskateers Sam, Bradley and Henry Clarke.

So with one boomer of a contest under its belt, season twenty twelve is out the door and running at high speed – threatening to serve up a bumper set of battles for the Crowns.