Tommy Mulder produced a masterful backside attack to claim the May pointscore Open final, held in clean one metre swell on an ideal autumn day – but Jarrod Horner is still leading the title race.

Mulder switched from the rights and lefts to pile on the scores throughout his heat, semi-final and final, getting more vertical with each wave taken. His gravity-defying upside down re-entries had the crowd hooting. 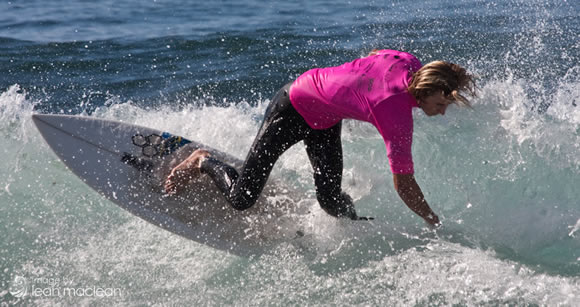 Matt Cook was also in top form, making every manoeuvre count as he powered to second placing, just a point ahead of Horner in third.

Horner, the reigning champ, maintains his spot on top of the leaderboard, followed by Cookie, Kim Anderson and Tyler Barnes.

The battle for supremacy in the Junior championship between Reece Moffat and Jacob Boylan continued, with both riders on fire throughout the event.

Reece prevailed in the final, with Jacob runner-up, pint-sized Nathan Martin a fraction behind, and Tom Lotter in fourth.

The SuperGroms division is getting hotter and hotter, with Roan O’Sullivan and Dion Earle going one and two in the final to both leapfrog Eathen Jackson on the championship ratings.

The two big improvers in this division, Jed Felice and Travis Heaps, were again impressive in finishing third and fourth.

See the Gallery section for a magnificent display of photos by Leah Maclean.